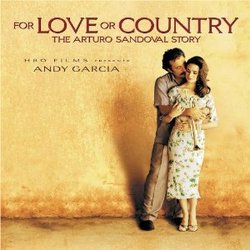 For Love Or Country: The Arturo Sandoval Story - Original Score

Review: For Love Or Country: The Arturo Sandoval Story (score)

Starring Andy Garcia in the lead role, For Love or Country is the HBO film about Cuban jazz musician Arturo Sandoval and his escape to personal and artistic freedom from his homeland to the United States.  Told mostly through flashbacks, For Love or Country shows the moral struggle of artists stuck in totalitarian regimes: even if they themselves can leave (Sandoval had the backing of jazz great Dizzy Gillespie), they must consider the ramifications on their family.  If the artist leaves, his or her family may not be able to follow.

This Emmy-winning soundtrack takes a very even-handed approach to the material.  This is a story ripe with intrigue and danger: Will he escape?  Will his family escape?  What must it be like to be a creative soul trapped in such a harsh existence?  This score, with one of the producers being Sandoval himself, gives you a reasonable blend of suspense and culture, evoking the story and place adequately.  Hearing the pieces, we feel the story's challenges unfold.

Although the soundtrack certainly does adequately convey the story and atmosphere, it definitely does not break any new ground, and for jazz lovers, it will be a substantial disappointment.  There are some nice jazz moments, for instance in "Together Again", but overall, the score seems to almost make an effort to be indistinguishable from soundtracks of other made-for-television movies.  For a film with music at its core, one would think that this soundtrack would be a rich compilation of source pieces and powerful new scoring.  Instead, it comes across as very by-the-book.  With Dizzy Gillespie as one of the characters, we want to hear a great jazz score, but what we get is token jazz, nothing more.  Also, most good movies have motifs or themes that distinguish it; hearing a few bars brings you back to the story; here, almost no attempt is made to do that.

Unfortunately, it is tough to recommend this score to anyone.  It is not bad or poorly produced, but it is just un-superlative.  It doesn't excel at conveying Cuban culture.  It doesn't excel at giving you some great jazz pieces.  It serves the purpose of filling the scenes in the film, and nothing more.  With such a good story, we would hope that they would try harder.