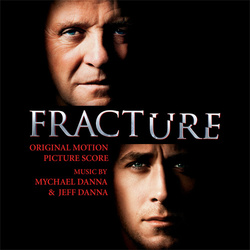 Fracture is a suspenseful thriller with two very talented actors in front of the camera (Sir Anthony Hopkins and Ryan Gosling) and two very talented composers behind the camera (brothers Mychael and Jeff Danna). Reading reviews for the film (which, in all honesty, I have yet to see), I am led to believe it is a polished Hollywood suspense film with the performances perhaps more convincing than the script. The score itself is of the "polished Hollywood" sort as well: it is expertly orchestrated and expansive in sound, sometimes even epic, yet it feels reheated with, perhaps, a little stale aftertaste.

There is elegance in the way the composers have brought this suspense to the orchestra, with fully-fleshed out string ensemble parts and an omnipresent piano firmly rooted in the minor modes. There is very little dissonance and no atonality; it is a tortured work respectful of the minor key harmonic progressions and content to let in the lower woodwinds briefly color the strings with malevolence, if only for a few seconds. Ted Crawford\'s (Hopkins) personality and the mind games he plays with the young prosecutor are thus given an old school sophistication that is hardly original yet well played and almost unavoidable given the casting of Hopkins in the lead, a man who practically revitalized the essence of sophistication for the bad man. His theme is a short, five-note motif which keeps ascending until the last note which goes down and leaves us hanging. It is introduced in "The Rube" and the brothers Danna use it quite prevalently in the first cues where, for instance, an oboe pitches it over Debussy-like coloring experiments which quickly descend into creepy dissonance for tremolo strings and overpowering brass in "You\'re Home Early".

The young prosecutor, Willy Beachum (Gosling), is given a short theme of his own, introduced in "Beachum". It is an almost cyclic motif that can be reiterated back-to-back, starting on a tone before plunging down and scaling back up to the first tone. Beachum is also given an assortment of wild synth loops, affected drum set beats, and a weirdly-distorted electric guitar motif that seesaws from left ro right speaker, all elements that pitch his modern attitude against Crawford\'s more traditional and Romantic stylings. The clash of these sounds is perhaps even more distinctive than the melodies themselves which are purely functional and so short they act as malleable core motifs more so than sweeping themes. Both Mychael and Jeff Danna have a history for strong, ethnic-tinged melodies; unfortunately, the themes here are disappointing, perhaps mostly because of the constraints of the genre.

Three cues raise the score above its otherwise steady dynamics: "Objection", "Suicide", and "I Decide When It Gets Pulled". The latter, especially, unleashes on the listener a kind of insistent minimalism, with a static chord for the low brass attacking the listener over and over with powerful drumming giving the piece even more insistence. This kind of purely orchestral dramatic weight has rarely been heard from the Danna brothers before and may serve as a glimpse to the kind of score Mychael Danna composed for Hulk before Elfman was brought in.

Fracture\'s construction is solid and detailed; yet, this suspense score is not particularly thrilling or engaging on album. The themes are not remarkable and are easily overshadowed by the stylistic clashes. The approach is not novel, yet it undeniably works. Both Mychael and Jeff Danna have composed more engrossing works in the past and I found Mychael\'s recent Breach more involving than Fracture. Both are suspense scores, yet Breach showed more diversity and a more appealing emotional side even if, in terms of sound, it wasn\'t as broad and imposing. This is indeed the "polished Hollywood" sound: well crafted yet somewhat predictable. It certainly pays the bills, but I could name quite a few albums with the name "Danna" on the cover that would blow the socks off of Fracture.

N.B.: On a more practical note, the score for Fracture is only available as a digital download on Apple\'s iTunes at the time of this writing. Don\'t go looking for it at your favorite brick-and-mortar store.