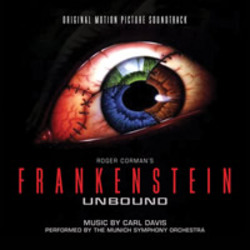 BUYSOUNDTRAX Records present the premiere release of the soundtrack for Frankenstein Unbound, featuring music composed by Carl Davis for the 1990 science fiction/horror film.

Frankenstein Unbound was a film with a modest budget and a very ambitious story and while the final film received mixed reviews at the time of its release, there is no question that one of the wisest decisions made during production was to hire composer Carl Davis to score the film. Performed by the Munich Symphony Orchestra, the score contains some of the composer's best work, including one of his best main title themes.

This release is a limited edition release of 1200 units.