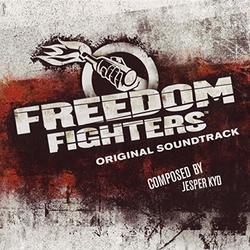 Jesper Kyd has proven that he will go far in the computer game score business with his impressive scores for Electronic Arts' Hitman series. With Freedom Fighters, Kyd once again provides a score that goes beyond boundaries, worthy of cinematic merit. The score is executed primarily with eclectic electronic beats and rhythms. Orchestral synths are also utilized making the score feel contemporary yet, oddly enough, epic. But what makes this album really stand out are the spectacular choral arrangements performed by the Hungarian Radio Choir. The choir soars with Soviet-like anthems reminiscent of Basil Poledouris' The Hunt for Red October.

"Main Title" sets the tone perfectly for the album exploiting the choir to full effect accompanied by nifty electronic beats. After hearing this track, the listener knows exactly what to expect; a cool ride. "Main Title" aside, a personal favorite of mine is "Rebel Base" - a piece where Kyd fills us with hope, and lights a candle in the dark fascist alternate world the game makers have designed. "Rebel Base" is electronically melancholic, ethereal and genuinely haunting. I compare it as a distant cousin to Brian Eno's "An Ending (Ascent)" - beautiful stuff.

The music wasn't composed specifically to hit key moments of action. After all, it was composed for a game and because of the sporadic nature of game play, music can never be spot-on with the happenings on screen. So the CD is compiled more like an album by Vangelis or Enigma. Each track has its own style and rhythm creating a perfect sonic backdrop for the different levels and missions EA has created for gamers. On the downside, a few tracks become sorely repetitive after a while.

Anyone who enjoys a score with a lot of choral arrangements, electronics and epic scope will love this album. If you are a fan of Vangelis, Enigma or E.S. Posthumous, do yourself a favor and buy this CD already! Keep up the good work, Jesper Kyd!