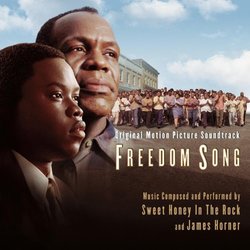 Conducted by James Horner / Sweet Honey In The Rock

For the civil rights film Freedom Song, director Phil Alden Robinson (Field of Dreams) once again picked composer James Horner to help with the underscore. Actually, that's not quite accurate. He picked the pre-eminent women's African-American a capella group, Sweet Honey in the Rock to write the evocative uplifting songs and Horner seems to have filled in most of the gaps. The soundtrack album primarily consists of songs - all of which are performed by Sweet Honey in the Rock.

"Eyes on the Prize" is a great song that certainly evokes the mood and feeling of the Civil Rights movement in the 1960s. In fact, most of the songs are traditional ones stemming from the movement. Sweet Honey in the Rock has plenty of energy to their performances, and I found them extremely enjoyable to listen to. The final song, "Song of Freedom" is definitely a highlight of the album, and Carole King's lyrics (which incorporate many traditional gospel lyrics) and her performance (with Sweet Honey) provides a memorable listening experience.

There are a few orchestral cues, and provide a rather nice minimalist mood to the album. This is somewhat different than what we might have been expecting from James Horner, and it provides a refreshing break from his usual style. However, in a rather disappointing move, most of the underscore is covered by dialogue from the film. This is the second time that Sony Classical has done that recently (Angela's Ashes was the other album), and I certainly hope that this trend does not continue. If I want to hear dialogue from the film, I'll watch the film! Most people buy soundtracks for the music from films they see - not for the dialogue.

Running almost an hour in length, I found this to be a rather satisfying album to listen to (with the slight exception of the dialogue). Sweet Honey in the Rock provides some great memorable performances, and I will certainly be checking out some of their other albums now that I've been exposed to their work. I would recommend that you do the same.