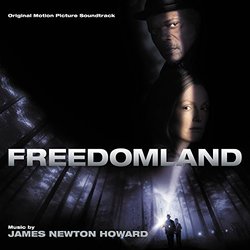 Originally due to be released in November 2005 and given an Oscar push by Sony, the racial-mystery Freedomland suddenly found itself delayed and then unceremoniously tossed into the "dumping ground" of early February releases, where it failed to connect with an audience. Loosely based on the story of Susan Smith, Freedomland is about a woman, Brenda Martin (Julianne Moore) who claims to have been carjacked - with her son still in the backseat of the car. She describes her assailant as a black man - stirring up racial tensions in the area. Samuel L. Jackson is the investigator assigned to her case, but he has his own doubts about her story.

Composer James Newton Howard scored the film prior to coming on board King Kong, in case you were wondering when he had the time to squeeze this project in. His approach to the film is a modern one that has three different styles: cold atmospheric electronics (Mel Wesson is credited with "additional music"), soft and warm cues predominately played by piano, strings, and woodwinds, and a contemporary blending of the two.

If you\'re expecting a rousing orchestral soundtrack, Freedomland is not going to work for you. However, in the past Howard has proven his ability to effectively deliver solid contemporary material, and it is his experience and quality that come through here. The colder electronic-heavy cues ("The Lie", "Unrest", "Rafik is Arrested", "Burning") work in an effective way, slowly building the tension that was necessary to the film\'s dramatic plotline.

Thematically, there were two major themes (and a few motifs) that I was able to pick out. The first is heard initially at the beginning of the "Main Title" track, and has a slight Sixth Sense vibe to it - but once the electric guitars come in, however, it goes in another direction. The other is an ascending/descending melody, heard towards the end of the "Main Title". As the album progresses, the use of these themes grew on me, so that by the time we got to "I\'ll Come See You" towards the end of the album, it was working, and provided necessary warmth to counter the cold electronic cues.

When all is said and done, the album runs about 45-minutes long, which feel like a good length for this material. There is enough variety and depth to the music that everyone can find parts to enjoy, although through iTunes you might want to cherry-pick the tracks that suit your tastes.