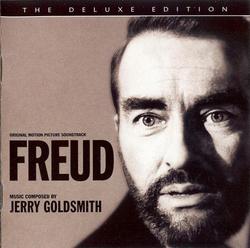 For those who listened to Robert Townson's 80th birthday tribute to Jerry Goldsmith on Sirius/XM Radio's Cinemagic back in February, you heard a preview from this new album. Now, here's the whole thing! Jerry Goldsmith received his very first Oscar nomination for his score for John Huston's 1962 film Freud.

An utterly brilliant score, Freud gave Goldsmith the opportunity to psychologically probe the human mind. He merged his own musical style with the Vienna school of Berg, Webern and Schoenberg to produce an agitated and thoroughly captivating work. Without question one of the most important scores of Jerry Goldsmith's career, there were even cues from this score which found their way (much to Goldsmith's chagrin) into Ridley Scott's 1979 classic Alien.

Freud follows the career of the famous doctor (Montgomery Clift) as he leaves his work in Vienna to study hypnotherapy in Paris with Professor Charcot (Fernand Ledoux). After marrying (Susan Kohner) he goes to work with Dr. Joseph Breur (Larry Parks) to treat a young woman (Susannah York) and a young man (David McCallum) whose neuroses form the basis of Freud's major theories and lead him to focus on analysis in place of hypnosis.

Now expanded from its original LP release, Freud comes to CD for the very first time!