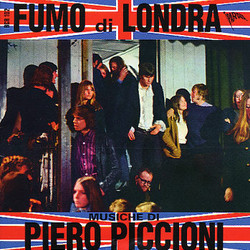 Much of the film's considerable allure derives from the enchanting soundtrack of Piero Piccioni. This masterful composer collaborated many times with Sordi, writing themes that were to became Albertone's career trademarks; "Marcia di Esculapio" from the movie "Il Medico della Mutua" and "Rugido Do Leao" from "Finché cé guerra, ce speranza."

The eclectic, instrumental side of Fumo di Londra boasts such exemplary pieces as "Babylon I'm Coming" and "Drag Beat" that paint the backdrop to the discotheque party scene. Like Michelangelo Antonioni's "Blow Up" and Desmond Davis' "Smashing Time", Fumo di Londra—with its Edwardiana and Royal Parks and River Thames settings—will forever celebrate the mythology of Swinging London.