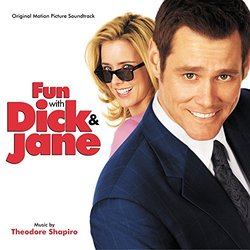 Fun with Dick and Jane

Review: Fun with Dick and Jane

Among the plethora of recent remakes is Fun with Dick and Jane, a Jim Carrey black comedy vehicle, updated from the 1970\'s original starring Jane Fonda, concerning a company man who has been laid off and decides a life of robbing banks will now be the best way to pay his bills. It can still be a relevant story in this day and age, though whether the film actually needed Jim Carrey\'s unchecked mania is up to each viewer. Teddy Shapiro composed the film\'s rollicking score, which calls upon the spirit of Lalo Schifrin, Roy Budd and Isaac Hayes.

The album opens with the funk-influenced "Ameribank Robbery", a rapid fire and bullish track for bass, drums, guitar and strings with grooves right out of the decade which brought us the original version of the film. "Job Calls" then settles into a funky, lazy backbeat under electric keyboard, guitar and sighing strings before "Office Chaos" punches forth into a brief, all-out rock jam, with short string interjections. The funk then continues into "Black Jack", another great up-tempo showcase for bass guitar and electric keyboard set against drums and strings. These first four tracks form an nice, unofficial suite of the score\'s gritty rock element before arriving at the film\'s actual "Main Title", cheery and perky tone, orchestral in nature, with staccato strings, acoustic guitar and piano driving the cue.

Three brief tracks follow, building back to the groove-oriented mindset, which explodes outright again in "Race For The Job", revisiting the motivic material from "Office Chaos" expressed in 2-note clusters on guitar (being a fan of Michael Giacchino\'s work on the television series, Alias, this reminds me a bit of that style). "I.N.S.!" begins with gentle Spanish guitar before bringing in the full strings, drums and percussion in a sneaky cue still in the Spanish mold. These musical colors receive more extensive treatment, through the addition of brash trumpet and bellowing male chorus, in "Illegal Immigration", where it seems it could score a bull-fighting sequence instead. The manic energy is slowed considerably in the gentle piano and strings of "Sleeping Beauty" and "Got the Back Yard".

The next track opens with dialogue, a lecture on the sounds of insects, and mention of crickets leads into a cool, laid back jam with one instrument amusingly attempting to match the buzzing calls of a cricket. The rock elements return in "Need a Good Wheelman" and "Escape from the Headshop", the latter including piping trumpets almost back in the Spanish genre again. "Bank Plan" keeps the groove moving, but in a more serious guise with piano, both low and high end, strings and timpani bringing the gravitas. The tension is eased up in "Grand Cayman Bank", another head-bobbing, fun jam for electric keyboard, drums, bongos and electric guitar.

Strings and piano return in subtle dramatic guise for "Gun Pull", though the track ends on an ominous note. A bass guitar lick kicks open "Starbucks Hit", quickly joined for a jolt by the band, but then the orchestra revisits the "Main Title" bright, thematic material, with its descending melodic line, in "400 Million Dollars". The album and film close out in another toe-tapping, funk-laden groove for the "End Credits", which is fitting considering how much of the score was dominated by this style. I have long been a fan of many of the 70\'s film scores influenced by the pop/rock styles of their day, with Quincy Jones\'s They Call Me Mister Tibbs, Lalo Schifrin\'s Dirty Harry and Roy Budd\'s The Stone Killer being particular favorites. It was a great treat to hear this genre being revisited and reinterpreted to fine effect here, though one hopes it will expand out of the comedy realm and back into the action arena too!