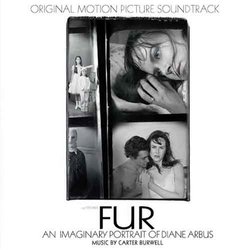 To my knowledge, there are few film composers out there with truly distinctive styles, composers whose new music can be immediately identified as belonging to them. Danny Elfman, David Julyan, Elliot Goldenthal, Mychael Danna, Philip Glass, and Thomas Newman, those are the names that come to mind. They compose music that contains more than -isms and little trademarks; they compose music that is intrinsically theirs. Carter Burwell\'s name is also part of this list. His scores are usually quirky and bare in their instrumentations, conveying dual feelings of melancholy and elation. His latest opus is for the movie Fur: An Imaginary Portrait of Diane Arbus and it takes its place within the Burwell canon as a more dynamic cousin of Being John Malkovich and Gods and Monsters.

The ensemble Burwell called upon for Fur had the distinct potential for jazz: piano, bass, percussion, celli, saxes, and drums. But apart from a few jazzy extrapolations, the style is urban, minimal, taut, a tad playful, and slightly disturbing. It perfectly captures Diane\'s fascination with her shaggy neighbor in what would ultimately become a career of photographing the pain of the freaks and the deformed. An important theme, a rising three-note melody that recalls Burwell\'s theme from Being John Malkovich, is insistent and somewhat triumphant, representing both Diane\'s desire to leave her husband\'s shadow and her growing fascination with her neighbor. This theme is sprinkled throughout the album and is played by a wide variety of instruments. The main theme, first heard in the second half of "The Fur", is also in Burwell\'s trademark triple meter: it is a docile, almost childish, vaguely jazzy calling card that soothes Diane\'s initial character very well.

Fur is a very difficult score to describe but a very easy one to enjoy. It is highly percussive and rhythmic, yet does not recall Thomas Newman\'s signature phase characterized by such scores as American Beauty and Pay It Forward. Burwell continues to explore interesting keys and modes, utilizing a bare-bones ensemble to craft a peculiar sound that is strikingly original yet immensely approachable and entertaining. Like Gods and Monsters, it balances feelings of joy and sadness, but is not as lyrical and absorbing as the former. Still, it confirms that Burwell is, indeed, a highly innovative craftsman in the field of film scoring with a voice of his own, and Fur is recommended to anyone willing to step out of John Williams\' footsteps for a solid and inventive 45 minutes.