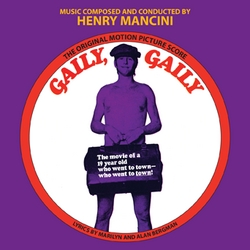 Kritzerland is proud to offer a double bill of two never-before-released on CD soundtracks on one CD—Gaily, Gaily, music composed and conducted by Henry Mancini and The Night They Raided Minsky's, music composed by Charles Strouse.

As was Henry Mancini's wont back then, the album for Gaily, Gaily was a rerecording—it contains all the film's themes, but not the actual film tracks. The movie's main theme, "Tomorrow Is My Friend," is one of Mancini's most beautiful and haunting melodies—it's heard here in several variations, including a beautifully sung version by Jimmie Rodgers (the lyrics to this and the film's other songs are by Marilyn and Alan Bergman). The album also included a recitation by Melina Mercouri, accompanied by Mancini's underscore. As always, Mancini's music is tuneful, memorable, and altogether wonderful.

The score for The Night They Raided Minsky's was by the great Charles Strouse, who'd written Broadway shows, as well as the score to the film Bonnie and Clyde. With his lyricist, Lee Adams, he wrote several really clever and catchy songs for the film, as well as a bunch of clever and catchy themes to go with them. It's a wonderfully melodic score, and features vocals by Rudy Vallee, Dexter Maitland, Lillian Heyman, as well as the film's stars, Jason Robards and Norman Wisdom.