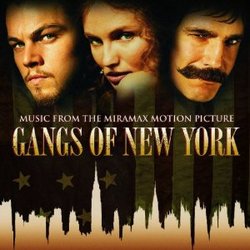 Gangs of New York is Martin Scorsese's latest attempt to win a much overdue Academy Award.  It takes place, unsurprisingly, in New York City, circa The Civil War.  The film, starring everyone's favorite Titanic heartthrob, everyone's favorite Charlie's Angels heartthrob, and, well, just a damn fine actor in the form of Daniel Day Lewis (who was working as a Dutch cobbler before he accepted Gangs), jolts the audience through a two hour plus ride of history, violence, and beautiful cinematography.  It's got its flaws, but on the whole, Gangs is just a terrific piece of cinema.

A composition by Howard Shore was used to score the film, broken into three parts: "Brooklyn Heights 1," "Brooklyn Heights 2," and, wait for it, "Brooklyn Heights 3."  I was initially disappointed by this sporadic use of his music in the film, but the rest of the music is so intriguing that it creates a successfully eclectic recording that's well worth the listen.  The music includes Celtic flutes, Chinese opera, fife and drum bands, Peter Gabriel, and one piece by the 1940's banjo player, Sidney Stripling, just to name a few.  As the liner notes explain, there were actually 86 pieces of music in the film, so the soundtrack is only a sampling.  If you're looking for a soundtrack with a solid theme, move on to the next review, but if you want something that succeeds on several levels, this one's for you.

Some parts of the soundtrack (including, of course, Mr. Shore's work) truly stand out.  Among these are "Dark Moon, High Tide" by Afro Celt Sound System, which begins with a brief thumping percussion piece with a rhythm to make the cast of Drumline jealous, before fading quickly into much more of a Celtic Lord-of-the-Dance-meets-Enya-meets-Far-and-Away slow dance mix.  The much ballyhooed "The Hands That Built America" by U2 appears on the disc as well, and is actually worth all the ballyhooing (yes, I made it up, but it should have already been a word, so work with me here, will ya?).  Other fine tracks include "Signal to Noise" by Peter Gabriel, "The Murderer's Home" by Jimpson and Group, "Dionysus" by Jocelyn Pook, and "Paddy's Lamentation" by Linda Thompson.

So would I recommend it?  Yes.  Is everyone going to like it?  Not a chance in hell.  But I'm on about my tenth go-around listening to it so far, so you be the judge.