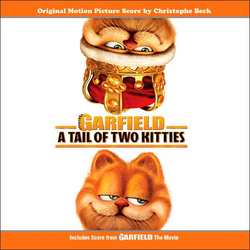 I still am in amazement that Roger Ebert gave two thumbs to both Garfield: The Movie and its sequel, Garfield: A Tale of Two Kitties. Maybe he simply has a soft spot for cats. I realize these films were not made to be Oscar winners and Bill Murray is obviously just cashing a fat check as the voice of Garfield, but they both just seem so pedantic and pointless. This review will of course focus on the music itself, as composed by the prolific Christophe Beck, but not how it works in context of the films, as I do not plan on viewing them for any reason. Regardless, it is a great thing that there are more score album releases now due to certain AFM union rule changes, thus allowing composers who work often on comedies and song-dominated films to also have their music preserved and available on disc. I for one did not expect music from either Garfield installment to make it to CD, but instead we receive this release which features select cues from both.

The album opens with "Garfield\'s Theme", a four-note theme heard on English horn, which be play both sincere and mischievous, above high strings, harp and chimes and then on vibes in a low-key jazzy setting with pizzicato strings, flutes and bongos. The theme introduces "Arf, Arf, Arf, Quickly", a brief but busy, syncopated cue. "Stupid Gone Wild" features more screen-specific scoring, through bubbling low winds, xylophone accents and sneaky pizzicato strings, while "Dogs Run Away" is a cue split between the charging action of brass and snares and a quiet, reflective piano and strings section. "Move Pinky Move" is of the frantic, syncopated cartoon-ish style, probably most appropriate for these films, as I don\'t know how else a composer would accompany scenes of CG-animated fat cat in action.

There is some nice woodwind and horn sonorities opening "Bucket Trap" before the comedic crash-bang accents occur. "Jon and Liz" is soft, short respite of strings, clarinet, flute and horn lines. "Animal Control" is full of sharp military percussion as "Plate of Courage" places Garfield\'s theme in an inspirational setting of bright string and winds, plus more martial snares. Further permutations on the main theme occur in "Lost and Found" and the pace picks up again in "A Really Big Train Set" with string and xylophone ostinatos punctuated by low brass. "Home Again" displays the sweet side of the score and main theme, closing on a muted sustain, before the album moves into its section devoted the sequel, A Tale Of Two Kitties.

With the story now shifted to the UK, "Carlyle Caste" carries more open horn harmonies and a steady, stately main theme on bright brass, then strings. The British sensibilities continue in "One Pampered Prince" as the new main theme is put through more active variations against percolating horns and strings. The original Garfield theme appears briefly to close the cue. "Chasing Tail" mostly features a sprightly pace maintained by a recurring string ostinato, doubled by snares, with brass exclamations. A brief, understated display of classical oboe and strings is heard in "Heir To The Throne", while "Stowaways" returns to Garfield\'s theme on vibes with bongo accompaniment. The abbreviated "Fat Cat Waltz" sets its light instrumentation in time, grounded by low basses and tuba. The tuba carries on into "Destiny Calls" performing Garfield\'s theme before it is passed to other sections in a swirling piece of frolic.

"The Lonely Housecat" takes a sharp left turn in terms of style, as Garfield\'s theme is suddenly developed in a laid-back country setting of acoustic guitar, organ, drums and piano. The stately British theme returns to open the frantic "Room Wrecker" while in "Mirror Dance" the playful waltz tune is heard again, this time in cheeky pizzicato and lightly bowed strings. Sneaky suspense dominates "G-Cat", "Cat Got Your Bum" and "Taunting Dargis", the latter two tracks highlighted by adding in syncopated bursts of action. In "A Hero And A Gentleman" there is a tender moment for piano and cello, as the music turns sweet as it did it "Home Again". The scores shifts in style once more to a 60\'s rock variation of Garfield\'s theme in the closing track "London Crawling".

Chrisophe Beck fans might want to check this out as further representation of his growing body of work on disc and also as a lightweight, fun listen. However, as with much of today\'s comedy scores which follow the on-screen action too closely, many of the cues do not work as well on disc as they might when set against the picture.