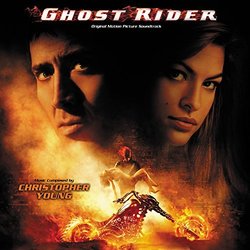 It still amazing me what the power of marketing can accomplish. Case in point being Ghost Rider, which sat on the shelf for more than a year. Despite negative reviews, the enormous amount of advertising helped it achieve the number one spot for its opening weekend, garnering about $44 million and whether or not audiences actually enjoyed the story of a professional motorcyclist who sells his soul to fight crime and the son of the devil, the project provides composer Christopher Young a success to put him back in the spotlight. He has of course come a long way from his early days primarily scoring horror films, his immense talent never in question and with the upcoming Spider-Man 3 poised to be the highest profile film of his career, Ghost Rider is either the calm before the storm or a harbinger of even more success.

What drew me and most other fans to Young\'s work were his captivating scores for little films that tried and often failed, such as Def-Con 4 and Flowers In The Attic, but his mastery over the horror genre was solidified in 1987 with Clive Barker\'s Hellraiser.
I found his music so rich in texture and inventiveness; the tonal and atonal qualities were like nothing I had ever heard before. His fusion of electronics and orchestra also yielded many surprises and some of the most uncompromisingly dark and brutal film scores since Goldsmith\'s The Omen trilogy. Incidentally, back in 1988, the first CD I ever purchased was his epic Hellbound: Hellraiser II, as I had had to watch much of the film with my eyes closed and therefore could really enjoy the music. I followed his career ever since, even having the pleasure of meeting him back in 1994, and I always held out hope that his talent and enthusiasm would propel to great heights in the industry. Before it was common for film composers such as Brian Tyler to be self-professed film score geeks, there was Christopher Young, who not only gained inspiration from Goldsmith and Herrmann but also had an impressive record collection of theirs and many others work. This made him even more endearing to fans like me.

With Ghost Rider, he is able to dig deep into his reservoir of skills, producing a score encompassing not only horror, but also propulsive action, large brass and choral textures, a small dose of romance and sense of fun through gritty electric guitars and drum passages. The album opens with "Ghost Rider", a three minute overture kicked off by strumming acoustic guitars, as if heralding The Man with No Name from Sergio Leone\'s Westerns, but then expanding into dark-hued, full orchestra and choir and variations on the main theme – a short, purposeful minor-key melody, usually voiced by brass in 7 note phrases. The last minute contains a driving rhythm and a soaring setting of the theme, before the following track, "Blackheart Beat", introduces the hard rock elements of the score, with a rapid snare & drum pattern, colored by harsh electric guitar, eerie strings and choir and a generally threatening tone. "Artistry in Death" shifts between ominous atmospherics and the shuffling drum pattern from the previous track, punctuated by winds and muted and high-pitched horns, culminating in a presentation of the main theme by high winds and strings, anchored by a steady rock beat and frenetic electric guitar.

Some respite from the intensity is provided by "A Thing For Karen Carpenter" and "No Way To Wisdom", each presenting the brief love theme, in 3-note phrases, the former in a pleasant string and acoustic guitar combo, the latter substitutes the guitar for clarinet. However, the score is obviously dominated by its horror and action aspects, two more highlights of which are "More Sinister Than Popcorn", revisiting the hard rock grooves in a furious yet grand fashion, and "Chain Chariot", with its expectant start of wavering flutes, strings and guitar, the theme voiced by choir and gripping, kinetic action bits. In "Penance Stare", a more contemplative tone is achieved by plucked and strummed guitar and sympathetic string support, while "San Venganza" recalls the opening of "Ghost Rider" but more fully delivers on this Leone & Ennio Morricone spaghetti Western territory with its proud guitars, snares and soaring solo trumpet.

The last quarter of the lengthy, 60 minute album contains more notable highlights, such as the extensive yet mournful statement of the main theme in "Blood Signature", a welcome return to the lighter love theme in "Serenade to a Daredevil\'s Devil", the grand cacophony of "Nebuchadnezzar Phase", all leading to an epic conclusion, complete with chanting, charging choir in "The West Was Built On Legends". After is it all said and done, I am happy to report that it is great to be entertained and engaged in a Chris Young score again, even as it shows his continuing ability to bring depth and excitement to schlocky film material. I realize that he might prefer the class and subtly found in projects such as The Shipping News over horror and action of Ghost Rider, but like Goldsmith and Herrmann before him, Young really has a knack for giving these films weight and interest and also knows that they often yield a sense of fun not often found in high brow fare.