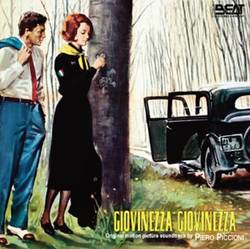 We return to our series dedicated to Maestro Piero Piccioni with this score composed for the film Giovinezza giovinezza. A dramatic feature film of 1969 against the backdrop of World War II and the everyday stories, love, friendship and Fascist Italy.

Soundtrack masterpiece of Maestro who testifies, for the umpteenth time, his multifaceted talent through the music that reflect the historical situation narrated in the plot in which dominates a recurring main theme, romantic, but veiled in nostalgia, loneliness and bitterness. A worthy corollary sound track atmosphere in constant balance between love and pain with some danceable piece of the period, Latin American music, jazz and blues variations of the main theme.

A must for lovers of music from films and of this popular composer, finally available in Jewelbox package with booklet of 12 pages illustrated by Alessio Iannuzzi, mastering and production notes by Claudio Fuiano.