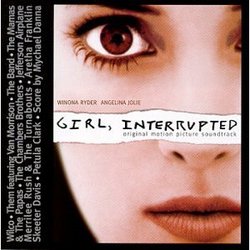 Girl, Interrupted is a bit more mainstream and straightforward than we've come to expect of films scored by Mychael Danna. Though the editing of the film's first twenty minutes or so is on the more surreal side, it thereafter sets in to a linear narrative and becomes a rather "pop"-ish film with some great acting. Responding to the nature of the film, Danna's music is some of his most accessible, even if not his most interesting or complex work.

Getting the songs on the album out of the way (since they comprise most of it), they tend not to do much for me. With Aretha Franklin, The Mamas & the Papas, Them (featuring Van Morrison), and others, we have a case of some reasonably lesser-known songs by well-known artists. The only songs in the film that really stand out in my memory are Petula Clark's "Downtown," and Wilco's "How to Fight Loneliness"—which, even though it's the only new song on the album, has a Simon and Garfunkel-ish familiarity to it.

As for Danna's score, to say that it is not on par with his usual work is not to say that it is not at times very pleasant, and occasionally very beautiful. "You Need a Rest" introduces Danna's main theme, a bit of minimalism where the harmonic progression never quite goes where one would expect. After this comes quite a bit of folksy guitar work (performed by brother Jeff Danna) and some suspense music utilizing string work similar to Ride With the Devil. What sets this score apart from other Danna scores (there's always something!) is the use of the Glass Orchestra, a Canadian quartet wherein all instruments played are made from glass. The sound is eerie, but for me, does not have the same effect as similar use of gamelan bells in The Ice Storm.

With twenty score tracks, I find myself listening repeatedly to about four of them, and the best of the music is near the end of the album. "Driving In the Rain" finds Danna's penchant for the clarinet shown here in a haunting trio with bass and bells, after which comes the best use of folk guitar in the score. "Going Home" restates the main theme, but this time, it evolves into a variation for flute that is (in my opinion) the highlight of the album.

1999 had brought about quite a variety of scoring assignments for Mychael Danna, with 8MM, Ride With the Devil, Felicia's Journey, and finally Girl, Interrupted. Though his latest score isn't as groundbreaking as 8MM or Felicia's Journey, it's a rather pleasant listening experience—even at about twenty-four minutes.