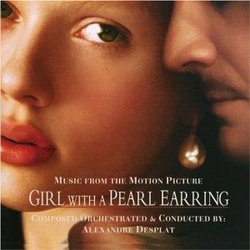 Girl With A Pearl Earring

Review: Girl With A Pearl Earring

Have you noticed the trend in cinematography towards making films look like paintings? The most prominent example was Caleb Deschanel's imitation of Caravaggio's work for Mel Gibson's The Passion of the Christ, but it was just one of many in the recent past. My vote for the most evocative and well-used example of this technique must go to Eduardo Serra and his gorgeous work on Peter Webber's Girl with a Pearl Earring. In case you do not know, Girl with a Pearl Earring is a meditation on Johannes Vermeer and his 1665 painting of the same name, the creative process, and the depth of unspoken emotion. Fittingly, Serra covered the film with myriad painterly touches, infusing its canvas with an interplay of shadows and light.

For his remarkable score, Alexandre Desplat complemented Serra's cinematography by infusing his music with, to borrow a cue's name, "Silence and Light." Although Desplat, a Frenchman, has been writing music for films in Europe quite successfully for some time and received some recognition in the United States for his score to The Luzhin Defence, his name is unknown to the general public. This score should change that situation. Nominated for a 2003 Golden Globe, Girl with a Pearl Earring is a stunning work both in terms of structure and power and is easily one of the year's best.

Desplat's ensemble in the score is small, consisting of a chamber orchestra with flute, trumpet, piano, and celeste dominating the solo passages, and he uses it delicately. After being bombarded by brass in action score after action score, it is a welcome relief to hear a warm, rich trumpet sound lift the melody from a flute and make it soar. Consider, for example, "Colours in the Clouds," the best cue on the disc by far. It begins softly with the low strings laying out the root movement of the chordal progression with a celeste providing ornamentation. Slowly, the cellos then violas enter, building the chords from the ground up. The celeste part expands as the violins enter and the flute finally carries the melody to the trumpet. There is no discernable change in timbre as this happens, just a natural progression as the rhythm and dynamics increase to a climax that occurs two-quarters of the way through the cue. Suddenly, the texture returns to that of the opening and we can hear that the same opening bass pattern has continued throughout the cue.

This progression points to a defining feature of the score's sound. Desplat has crafted a post-minimalist score, similar in many aspects to Michael Nyman's work. Small repetitive cells are established that then build and shift towards a clear emotional climax. An undulating melody is usually placed over these cells, but receives little development beyond changing orchestration. It is a strange choice to use such a modern compositional method considering the movie's setting in the Dutch city of Delft in the 1660s, but an effective one.

In keeping with this aesthetic, the score has only a few themes, one for Vermeer, an off-kilter percussive one for his patron Van Ruijven, and the most important one, Griet's. Griet, with her pearl earring, is the painting's subject and it is through her latent artistic ability that the movie considers the nature of talent and the creative process. Her theme, first announced in the aptly named "Griet's Theme," (just in case you couldn't work out the connection on your own), receives the most extensive resetting of any theme. It begins as a mournful flute melody, disconnecting from the pulsating strings and celeste in 3/4 that support it. By the cue's middle section, however, it has been transformed, its upward motion lending it a feeling of hope and promise. Soon the opening gestures return and the theme ends as it began with a note of resignation as we are denied a firm cadence. Thematically it is a perfect match to Griet's character arc over the course of the movie.

Small touches like that abound in Girl with a Pearl Earring and make it a completely satisfying listening experience. Do yourself a favor and become acquainted with Desplat's work; it's a name you'll be seeing a lot more in coming years.