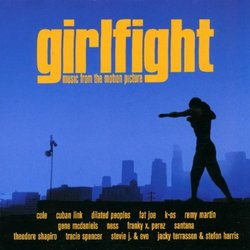 Girlfight is the critically acclaimed (and award-winning) film about motherless inner-city youth Diana (Michelle Rodriguez) who takes up boxing lessons. A tender and moving story, Girlfight is more about inner conflict than actual boxing. Supported by a percussive score by Theodore Shapiro, the music in the film contained an interesting collection of rap songs with a rather upbeat motif.

There are only two score cues on the album. Starting with "Title Theme", Shapiro's score is fast paced percussive with piano and hand clapping, topped off with nylon string guitar. It's energetic and exciting. "Tropicana" on the other hand, is more subdued and lush synths support a simple yet intricate solo guitar theme.

The songs for the most part are all rap songs - "Project Party", "No Retreat", "He's Not Real" and others all keep the same upbeat tempo and theme in the lyrics, but really don't do much for me as a soundtrack goes. In the film it's better than on the album. The album comes in two flavors: "clean" and "explicit". The differences are that the clean version merely blanks out certain words. These rap songs have a rather large amount of profanity, which means there are a lot of blanks. I was a bit confused to discover that some words I thought were okay (they're on Comedy Central all of the time) were blanked out, while other words (which definitely can't be played on network television) were left intact. Odd.

Two tracks of note, however, are "I Can Do Too" and "Out For The Count" - which Shapiro contributed to. It is in those cues that you can see how his music is easily integrated into the textures of a rap song. It actually works really well, and those are the only rap songs I really enjoyed. The inclusion of "Olympic Festival" by Santana features some great guitar work, but doesn't really mesh in with the rap songs.

With a running time of 53-minutes, it would have been nicer if some more score were presented on the album. But the intended audience for this album probably wouldn't be picking it up for the score - the songs are what drive this album. Shapiro's themes are good, and might be worth a listen - hopefully on a more substantial release.