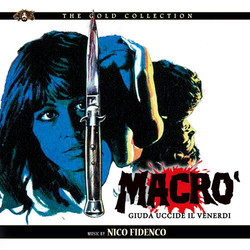 Kronos Records is very proud to present the soundtrack to the Stelvio Massi 1974 film Giuda uccide il venerdi (Macro), starring Sophia Kammara, Leonard Mann, Angelo Infanti, Franco Citti, Dada Gallotti, Luciano Rossi and Umberto D'Orsi. The score was penned by none less than the legendary Nico Fidenco and conducted by Giacomo Dell'Orso, pretty much Italian Film Music Royalty. Previously only a 7" ep containing the Italian sung main song of the film on side A and the English version on side B). This is a world exclusive and it is the first time Giuda uccide il venerdi is out on CD and for the first time in its complete form.

The score to Giuda uccide il venerdi is an eclectic mixture of various genres, ranging from lively uptempo pieces to quasi hypnotic and eerie, verging also on the Rock side of music at moments, with hints of 70's and prog rock elements. Fidenco and Dell'Orso were never scared to be daring and this score is indeed a daring one, a daring and gorgeous score that will haunt you and throw you back 4 decades back where there was so much to explore musically.