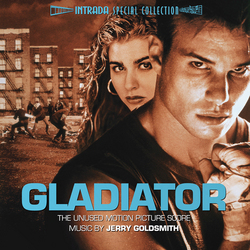 The 1992 Columbia production Gladiator might have been part of a sports movie quartet for Jerry Goldsmith—he'd tackled basketball in in 1986, baseball in 1992, and football in 1993. Gladiator boasted some of the inspirational qualities of Goldsmith's other sports-related movie projects, but the overall tone was much darker, dominated by desperation, poverty and violence.

Goldsmith had been employing an extensive palette of electronics in his scores since the mid-1980s, and his Gladiator score balances traditional orchestra and synthesizers equally. One key approach to the score is a funk-based, staccato bass line; clicking, metallic-sounding synth effects; a bluesy low piano line; acoustic rhythm section (including bongos); keening strings; and, finally, a burst of distinctive action licks for flute, marimba and piano that characterize Tommy Riley's fighting abilities. The score also features a moody love theme for piano and woodwinds, sparked by the smash of Simmons electronic drums, a staple of Goldsmith's late'80s-early '90s electronic effects. Although Goldsmith's score was removed from the film, Intrada is proud to present his complete score (from the original stereo elements) for the first time.