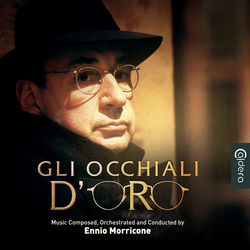 Giuliano Montaldo's adaptation of Giorgio Bassani's novel tells several stories at once. The title – Gli occhiali d'oro ("The Gold Rimmed Glasses") – was carefully and intelligently chosen. The over-arching subject is, after all, blindness. Or seeing, depending on how one chooses to look at it. One storyline concerns a doctor (played by Philippe Noiret) who is respected as long as he hides his homosexuality. Another deals with a young Jewish man (played by Rupert Everett) who recognises the threats Mussolini and Hitler pose in the Italy of the 30s. Against these stories of individuals, is one of communal blindness, of intelligent, educated and sensible citizens being lured by fascism. At another level, Gli occhiali d'oro is a scathing critique of the hypocrisy of the upper classes, in which everybody lives behind a facade to uphold their reputation and standing.

Though now difficult to find, Giuliano Montaldo's Gli occhiali d'oro was revered by critics when it came out in 1987. It won the David di Donatello Award for Best Music. The whole score is one of Morricone's most carefully crafted, a tender composition that not only manages to capture the grim atmosphere of the film, its dread and sorrow, but also enhances it, encapsulating the painful loneliness felt by its two protagonists. Gli occhiali d'oro is comprised of several themes: the main theme, which plays over the opening credits; the love theme for David and Nora; the comparatively upbeat "A Cena Con I Ragazzi", the forlorn and trepidatious "Persecuzione Storica"; and the yearning and desolate "Ricordo Del Ghetto".

Claudio Fuiano had prepared an LP programme of the score for Gli occhiali d'oro under Ennio Morricone's supervision for the film's release. However, the album was not issued until the 90s, by Screen Trax on CD. We use the same programme, remastered by Richard Moore. The score is not complete, since already by the 90s the original, complete tapes could not be located. We are delighted to finally make Gli occhiali d'oro available again and sincerely thank Claudio Fuiano for his kind and generous support.