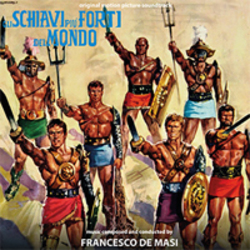 We are pleased to release the complete edition OST by Francesco De Masi for the Peplum film Seven Slaves Against Rome.

C.A.M. originally released an LP with 26 tracks selected by the songwriter (CAMCDR 33-9) lasting about 43 minutes. In 1987, the same material was later rereleased on vinyl in a limited edition series Phoenix (PHCAM 09). The first appearance on CD was in 1992 in the C.A.M. Soundtrack Encyclopedia series (CSE 026) paired with selections from the OST of the movie Revenge of Spartacus. For our CD (60:33 minutes total time) we used the master tape that half a century ago was assembled for the release of the LP and we have added new previously unreleased material, including a rare stereo mix which has been properly restored and remastered. A dutiful homage to artistic music by the unforgettable Maestro Francesco De Masi.