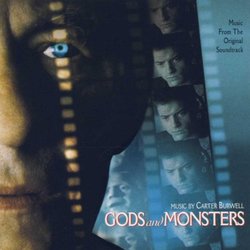 Gods & Monsters is in the same vein as Fargo and Being John Malkovich: it shows Carter Burwell\'s extraordinary talent for blurring the line between joy and sadness in composing music that, simultaneously, makes you feel happy to be alive and this much closer to death. He doesn\'t achieve this surreal effect with counterpoint; rather, it\'s all in the keys and the harmonies.

The film by Bill Condon is a fiction inspired by what could have happened during the final days of James Whale\'s life. Whale, as played by a flawless Ian McKellen, is a retired director who\'s had his fifteen minutes of fame with Frankenstein and Bride of Frankenstein, who is as openly gay as you could be in those days, and who is suffering from an uncontrollable resurgence of painful memories. He develops an unusual kinship with the young man who mows his lawn, Clay Boone (Brendan Fraser), and, as they reveal secrets about each other and are invited to partake in each other\'s lifestyles, they learn to make peace with their past.

Carter Burwell comes up with a number of themes which he shuffles around throughout the movie: airs, waltzes, and marches. The flair is sometimes Germanic, sometimes Romantic, with the strings sounding like the vielles of old, a tad dissonant and scratchy. Whale is given a youthful waltz as a theme, heard prominently in "Dripping" and which is adapted as 1930s B-movie extravaganza for the twisted dream sequence in "Frankenwhale". It serves as a bittersweet love theme to illustrate the complicated relationship between Whale and Barnett during the war ("Love in the Trenches", "Barnett on the Wire"). While Whale\'s waltz is based on three descending notes, Clay\'s theme concludes with a series of three ascending notes. It is given the most exposure in the opening titles, "Arise, Clay", in a strong quadruple meter (to distance it from Whale\'s triple-meter waltz) driven by shaker and bells. The score is complemented by an array of serene motifs and languishing string chord progressions to denote friendships and anguish.

Gods and Monsters reaches its climax with "Wrestling the Monster", a four-minute-and-a-half cue where every motif, harmonic progression, waltz, and march reach a resolution of some sort. The fact that this bundle of thematic material works from beginning to end is a proof of Burwell\'s clarity of vision. "Last Swim" opens with an urgent, tremolo violin chord, fading into a rippling version of the friendship motif. The fiddle elegy which ends the cue is a folksy rendition of Whale\'s waltz, one more example of bitterness and elation wrapped up into a single melodic line.

The album concludes with "Friend?", a classy tearjerker as Whale\'s waltz is given its posthumous sendoff, belonging now more than ever to Clay Boone\'s character, the scratchy fiddles and celli replaced by crystal-clear violins and violas, the circle complete. This is a great piece of work by Burwell, who achieves cohesion and economy of themes to a bittersweet effect too rarely heard in movies these days.