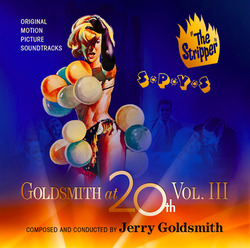 Volume 3 showcases two more of the composer's original feature film scores, one from the '60s – 1963's drama, The Stripper, starring Joanne Woodward (in the first of Goldsmith's collaborations with director Franklin J. Schaffner), and one from the '70s – 1974's espionage comedy, S*P*Y*S, starring Elliot Gould and Donald Sutherland, and directed by Irvin Kershner. From the jazz-influenced drama of The Stripper to the broad and lively comic antics and action of S*P*Y*S, these two dynamic Goldsmith scores demonstrate the composer's unique and boundless talents across two decades. This collection's presentation of S*P*Y*S (previously available in truncated form only in a long out-of-print box set) is expanded with never-before-released material. Also making its debut on this collection, is the bonus track premiere release of "Pacer's Farewell" from the 1960 western, Flaming Star, starring Elvis Presley. This marked Goldsmith's very first work for the studio.

Both previously out-of-print scores return here with all-new art design by Jim Titus and new in-depth liner notes by writer Jeff Bond. The reissue is produced by Mike Matessino and Neil S. Bulk, mastered by Matessino and is limited to 2000 units.