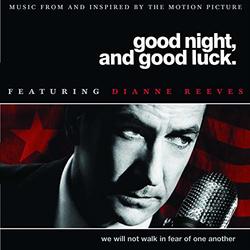 George Clooney\'s film Good Night, and Good Luck is a commentary on what is wrong with today\'s media. Where has journalistic integrity gone? It seems fitting, then, that the film\'s soundtrack asks a similar question: in a world where pop divas the likes of Britney Spears, Lindsay Lohan, Jessica Simpson, and Christina Aguilera rule the airwaves, one wonders, "Where have all the great classical songwriters and vocalists gone?"

Enter Dianne Reeves. This Grammy award-winning jazz vocalist is the heart of the soundtrack. It is no surprise George Clooney chose her as an instrument to tap into the era of 1950s America where his aunt, Rosemary Clooney thrived.

Reeves\'s voice invokes the innocence of that time gone by and makes her listeners long for it. Reeves is able to reflect that joy, playfulness, and pain in her interpretation of classics from Cole Porter ("I\'ve Got My Eyes On You"), Nat King Cole ("Straighten Up and Fly Right"), Duke Ellington and Irving Mills ("Solitude"), and Johnny Mercer ("One For My Baby"), to name a few. She transports the listener to that time in America when songwriting and music was so much more than the soulless bubble-gum yarns of today\'s teeny boppers.

George Clooney took great advantage using Reeves and these songs to invoke a true sense of time, place, and meaning. However, the songs on this album manage to connect as an organic whole, and stand alone without the contextual backdrop of his film.

Good Night, and Good Luck is that rare exception: the music not only lends itself to defining the film, but also stands alone as an exceptional jazz experience.