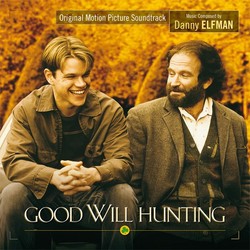 The music for Good Will Hunting is a far cry from the usual Gothic sound of the composer who proves himself to be more than capable when it comes to scoring a deeply personal story. The music features acoustic guitar, piano, a smaller ensemble of strings and woodwinds plus a light choral effect in addition to some Irish sounding whistles that address the Boston setting of the story. From the Main Title to the End Titles (previously known as "Weepy Donuts"), Elfman's music is mingling among minimalistic thematic variations the same way the titular Will Hunting is looking for a purpose in life.

Spicing up the intimate orchestral score are the contributions of indie songwriter Elliott Smith, whose Miss Misery was nominated for an Academy Award in the category of Best Original Song. The song gave major exposure to Smith who unfortunately passed away at the tragically young age of 34 in 2003.

Good Will Hunting has always been one of the great missing links in Elfman's discography. The original soundtrack clearly favored the songs by Elliott Smith (and other artists) while Elfman's work was represented with only two tracks. Although Miramax issued a rare Academy promo for members of the organization, that disc only contained selected highlights and Smith's Oscar-nominated Miss Misery.

Music Box Records presents the complete release of the score, including more Elfman music as what the promo contained, plus six compositions performed by Elliott Smith. The landmark release of this Oscar-nominated gem is supplemented with an 12-page booklet featuring expert commentary by Daniel Schweiger.