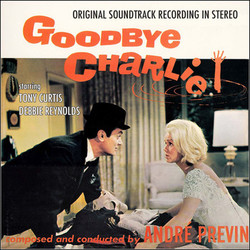 Disques Cinémusique offers for the first time in digital form the soundtrack to the movie Goodbye Charlie, composed and conducted by André Previn. This 1964 comedy directed by Vincente Minnelli, starring Tony Curtis, Debbie Reynolds and Pat Boone, was not a major box office hit but it certainly has its merits, including a diversified orchestral score.

Previn's contribution brings fanciful and substance to the sript. In addition to some easy-listening cues relevant to light jazz and Latin-American pop, the composer provides sophisticated incidental pieces relying on his extensive classical background. Goodbye Charlie proves to be another of these forgotten but highly enjoyable "old" scores that deserves a second life.