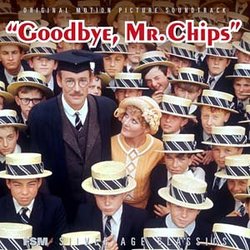 The FSM label continues to lead the way in definitive releases of classic film scores, through exhaustive research and restoration, complete and expansive albums and copious liner notes. With Goodbye Mr. Chips, a new major highpoint in their ever growing catalogue has been reached. Producer Michael Mattesino and the FSM crew have compiled a massive 3 disc set for the well-received 1969 musical, based on a book by James Hilton, starring Peter O\'Toole and Petula Clark and featuring music and songs by Leslie Bricusse and John Williams. This project brought Williams\'s talents for conducting and adaptation to forefront, leading to the subsequent, large scale film musicals Fiddler on the Roof and Tom Sawyer and soon paving the way for his involvement in blockbusters such as The Towering Inferno, Jaws and Superman. And while Bricusse was responsible for the music and lyrics, Williams tackled the underscore, orchestration and source cues and thus all the songs are provided rich orchestral accompaniment. Listeners with well-attuned ears can ably discern his personal flourishes and style throughout.

Disc one provides a complete overview of the score and songs as they were intended to be utilized in the finished film, plus several alternates, beginning appropriately with the ebullient "Overture" with its expected instrumental summation of upcoming melodies. The subsequent track "Fill The World With Love (Main Title)" is a reverent hymnal setting for organ and choir, while O\'Toole\'s first song is the reflective, nostalgic "Where Did My Childhood Go?". Petula Clark makes her first vocal appearance in the chirpy, winning "London is London", followed by the pleasant score cue "Pompeii", full of harp glissandos and warm string tonalities. Afterwards comes a large group of songs, from the magical "And the Sky Smiled" and "Apollo" with its impressionistic flute intro, the energetic "When I Am Older" and the optimistic "Walk Through The World". Next, there are two and a half tracks brimming with Williams\'s instrumental color and liveliness, the third splitting its running time between the "Entr\'acte" and Petula Clark\'s "What Shall I Do With Today?".

Peter O\'Toole\'s reassuring vocals return in the soaring "What A Lot of Flowers" and its reprise, while "Fifteenth Anniversary" is an understated cue mostly utilizing winds, chimes and strings. "The Postcard (\'And the Sky Smiled\' Reprise)" opens gently and is primarily instrumental, with only a brief vocal appearance by Clark. O\'Toole\'s lines in "When I Was Younger" almost act as counterpoint to the earlier "Where Did My Childhood Go?", where instead of looking back fondly as an adult, he is seeing through his child eyes again and envisioning the future for himself. A set of score cues follow, allowing Williams to expand upon the various melodic lines featured in the songs, pulling in different fragments, but also to explore dark, low register tones in both "Katherine\'s Death" and "The Boys React". Saddened solo cello with flute open the penultimate track, moving into a heartbreaking solo piano with chimes all before O\'Toole and chorus reprise the hymnal tune, "Fill the World with Love". The "Exit Music" closes out in a brighter frame of mind with an instrumental version of "You and I". After its finish are included this edition\'s first offerings of alternates in the "First Act Finale", based around "And The Sky Smiled", and "Fill The World With Love (Main Title)" and also the film version of the "End Title".

The second disc then covers alternate versions of songs and score cues extensively as well as source cues and amusing, insightful interview segments with O\'Toole and Clark. The tracks are sequenced in the order they would be set to appear in the film, if used. The source cues range from the quaint jazz of "Savoy" and "Ursula\'s Party", solo piano in "Katherine\'s Party Piano" and vocal numbers in a lounge setting, such as "And I Would Love You" and "The Perfect Man". The alternate version of the score cue "Pompeii" is a highlight, as it builds upon the affecting, descending melody from the opening of the film version, and adds specific orchestration to subtly heighten the sense of an ancient era long past. The song alternates vary not so much in the vocal component but mainly in their accompaniment, where there might a larger brass presence, additional flute flourishes or fuller string textures, such as on "You and I". The alternate version of the "Fill the World with Love" finale features O\'Toole without the chorus as backup.

The third and final disc includes not only the original 1969 soundtrack album for the film but also demos, unused songs and more interviews. The original LP release clocks in at just over 43 minutes, obviously focused mainly on the songs and excising the underscore bookends to each, such as the first minute of "Walk through the World" and the closing "Chips Resigns" portion of "When I Was Younger". The instrumental selections are limited to the "Overture", "Entr\'acte" and climactic reprise of "You and I". The first unused songs heard here, "The Roll Call" and "That\'s A Boy", both include spoken introductions by Bricusse and were intended for the Mr. Chips character, the former a list of his students and the latter a perky number about the difficulty in teaching literature to the youngsters. Another lively number, "Today" was meant for Katherine and the boys, "No One\'s Ever Been In Love" is a smiling, swaying romantic tune and Clark herself sings the rising, glowing "Tomorrow With Me", which is a bit more imbued with the pop affectations of its day.

And with a final resounding choral demo version of "Fill the World with Love" for the "End Title", the all-encompassing audio journey through the Goodbye, Mr. Chips production wraps, a feast for fans of the film, its stars, lyricist Leslie Bricusse and the legend John Williams. Kudos to all involved for presentation, restoration and the extensive notes on the film and its music.