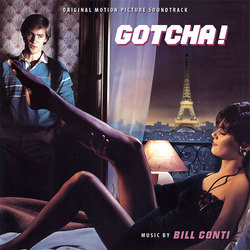 Bill Conti's score to the lighthearted, cold-war espionage, teen action-adventure thriller Gotcha! was one of many scores that got the short shrift on vinyl back in the '80s. It was a time when many a soundtrack collector would walk into their favorite record store and pick up a copy of The Goonies ("just one Dave Grusin cut?!?"), Ghostbusters ("just two Elmer Bernstein cuts?!?"), or The Karate Kid ("NO Bill Conti tracks?") and essentially leave heartbroken. While many of these wrongs have been righted with score-only releases over the years, there are still a handful needing to be addressed. As with Intrada's earlier release of Jerry Goldsmith's The Lonely Guy, Intrada has now righted the wrong of none of Bill Conti's score showing up on the original LP of Gotcha!, even though two score tracks were on the LP (hint to this riddle: they were not film versions).

With the steadfast cooperation of Universal Pictures and Universal Music Group, Intrada presents a score-only release of Bill Conti's lean score. Film antics aside, Conti plays it straight as the film unfolds in Eastern Europe with a score that would have been at home in a James Bond film like The Living Daylights, and with a warm nod to James Horner's Russian thriller music to Gorky Park. While the score is relatively brief, the album is rounded out with a host of alternates and extras. Unfortunately the vocals that appeared on the original LP release were not available for licensing.

Starring Anthony Edwards (Jonathan) and Linda Fiorentino (Sasha), Gotcha! is named after the game of assassination played on Jonathan's college campus. On a trip to Europe with his best friend, Jonathan meets the sophisticated, older woman Sasha. She envelops him in the task of retrieving a package from East Germany, where things turn dark and serious as Jonathan is caught up in a game of cold-war espionage.