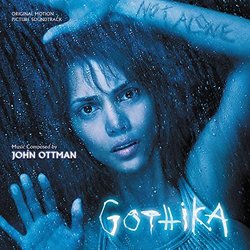 With Halloween: H20, composer John Ottman gave us his take on John Carpenter's classic horror theme.  It also gave us a taste of the type of horror score Ottman could write, and two years later he followed up on that with his horror score to Urban Legends: Final Cut, which he also directed.  Now, a few years after that, comes Gothika, a psychological ghost story starring Halle Berry as a criminal psychologist who is accused of murdering her husband.  The film takes us on a journey with Miranda (Berry) as she tries to figure out what happened to her, and come to terms with the ghostly messages that are driving her forward.  The film had only a few "scares", and there was even one psych-out moment that was caused by Ottman's score.  If there was ever a red herring of tension, it's the part when Miranda opens the cellar door towards the end of the film (the 1-minute mark of "Willow Creek").  No payoff in the film - it's all about the music.

Ottman, fresh off of X2: X-Men United, had to contend with an accelerated schedule when working on Gothika, and the resulting score suffers from some of that pressure. But at least Ottman made a concerned effort to keep the audience on edge, using orchestral effects, unnerving synth ambience, and driving tension.  Ottman is at his best when he writes thematic material, though, and thankfully there is enough of it amidst the chaos on the album to keep listeners happy.  "Miranda's Theme" is a deliciously Ottman-esque cue that provides the emotional backbone that the film itself was lacking.  "I'm The Mirror" is a softer rendition of that theme, and there's a nice melody for Rachael, the ghost who is trying to get Miranda to help her, in "Remembering Rachael".

There are plenty of good musical moments spattered throughout, including "The House / Dream", "Revelation", and the amusingly titled "I See Dead Kids".  Ottman fans, as well as horror score fans, will find this album (which runs nearly 50-minutes long) enjoyable, but I don't necessarily foresee it having the same type of replay value as some of his other, stronger works.