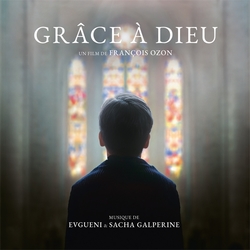 In collaboration with Mandarin Production and FOZ, Music Box Records proudly presents on CD the original motion picture soundtrack of François Ozon's Grâce ŕ Dieu (By the Grace of God) composed and orchestrated by Evgueni Galperine and Sacha Galperine.

Alexandre (Melvil Poupaud) lives in Lyon with his wife and children. One day, he discovered by chance that the priest who abused him to scouts always officiates with children. He then starts a fight, quickly joined by François (Denis Ménochet) and Emmanuel (Swann Arlaud), also victims of the priest, to "release their word" on what they suffered.

François Ozon's new film is inspired by the scandal surrounding a Roman Catholic priest who was accused of having abused scouts from 1986 to 1991, and was only recently indicted after several victims decided to file lawsuits. For the original score, François Ozon called on Evgueni and Sacha Galperine who recently composed Andrey Zvyagintsev's Loveless (2017). They also received Best Composer Award at the European Film Academy.

The music of Grâce ŕ Dieu reflects the fight of Alexandre with a haunting and hypnotic theme. To emphasize the search for truth by the main characters of the film, they wrote a very pure and luminous theme with the use of of boys' choir.