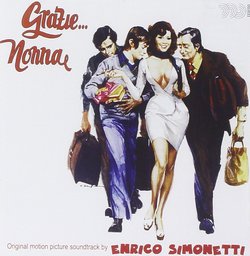 We dedicate this 33rd release in the DDJ series to a great film music composer, showman and actor, [C]Enrico Simonetti[], father of the popular Claudio ([C]Goblin[]). Long beloved in Italy, mainly for his TV career, he was also a worthy musician that deserves to be rediscovered.

The movie selected for this tribute to the great Enrico is Grazie... nonna, a sexy comedy shot in 1975 featuring the divine Edwige Fenech and Enrico himself in the role of her husband. It's a great score in that funky vein that DDJ producers love so much, but also combined with orchestral themes. Together they make for a wonderful soundtrack that shouldn't be missing from your collection!