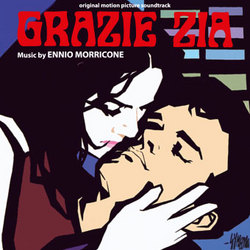 Digitmovies, with collaboration of Gruppo Sugar, presents on CD the complete version of the OST by Ennio Morricone, for the dramatic movie Grazie zia

The whole drama of the story is set against an interesting OST which is based on the recurrent use of the boy's choir of Renata Cortiglioni who sing a funny and surreal rhyme with Beat arrangements. The composer has created a magical and suspenseful atmosphere with a few instruments which perfectly represents the dimension of love and death in which the two protagonists are isolated.

"Filastrocca vietnamita" sung by Sergio Endrigo fully reflects the revolutionary tones of 1968. In those days C.A.M. issued a 45 rpm single (AMP 40), whereas in France a 45 rpm EP was released on the AZ label (EP 1259) with five selections. Four tracks appeared on the CD of the C.A.M. soundtrack encyclopedia series (CAM CSE 051) (where the song "Guerra e pace, pollo e brace" featured on the single was strangely doubled).

For our CD and with the full approval of the author, we could use the mono master tapes of the original session and include every recorded note (40:19) which includes both the material issued on the Italian and the French singles, but with the exclusion of one source music piece: a dance floor shake based on "Auschwitz" by Francesco Guccini from the year 1967 and which was not included in the master tapes.