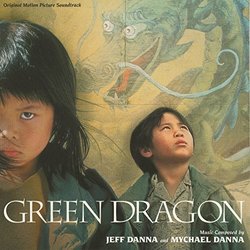 There is nary a bigger Danna fan in the world than I - referring to both Mychael and Jeff.  I've enjoyed nearly everything I've heard by Mychael (particularly The Sweet Hereafter) and Jeff's score to O was a pleasant surprise last year.  Considering that they'd collaborated several times on several "new age" records in the past, it makes sense that they would finally work together on a film score.  The result is Green Dragon.

Green Dragon is not a spectacular score in any way - it is, for the most part, reserved and understated, with thematic material that could easily slip past you if you're not paying much attention.  Like most Danna scores, it features some unusual ethnic instrumentation to compliment the orchestra.  In this case, they're traditional Vietnamese instruments, to coincide with the film's story about Vietnamese immigrants.

Whether it is a compliment or a curse, one cannot at all tell where Mychael's work ends and Jeff's begins.  To their credit, they have crafted a stylistically seamless work.  Though it's not as fascinating to listen to as their earlier work, it does make for lovely mood music, and a good sleepy-time album.  I suppose I expected a bit more, but it's difficult to disappoint me with a Danna score, especially when you consider cues as beautiful as "The Dragon Disappears," "America," and "The Wedding Night."

In short, this score is pretty enough, but essential only to Danna fans.  If you're looking to become acquainted with their work, check into Jeff's O and Mychael's The Sweet Hereafter and The Ice Storm (whose twelve minutes of score on the CD release are worth the price of the disc).

As a sort of afterthought, one wonders how Varese Sarabande has fared releasing such a low-key score to such an obscure film - perhaps a more resounding recommendation would boost their sales figures?  If so, then here it is - they are a label quite worth supporting.