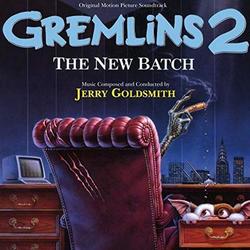 Continuing our celebration of what would have been Jerry Goldsmith's 90th year, we present the first ever 2 LP vinyl pressing of the Deluxe Edition to Joe Dante's Gremlins 2: The New Batch. The CD version of this Deluxe Edition to Goldsmith's brilliant and manic score for this classic sequel sold out upon release. Gremlins 2 is one of Goldsmith's most loved scores of the 90's and it's so exciting to bring the score back for vinyl enthusiasts.

For Gremlins 2: The New Batch, Joe Dante was able to pull off that rarest achievement in movies—coming up with a sequel that not only lives up to the original but, arguably, even surpasses it. Billy Peltzer (Zach Galligan) and Kate Beringer (Phoebe Cates) move to New York City and meet up with their Mogwai friend, Gizmo, when a series of accidents creates a new generation of diverse gremlins. Billy, Kate, and Gizmo must once again use all their experience to prevent the gremlins from taking over New York!

The significant expansion from the original 1990 release is fully captured over the two LP's, housed in a gatefold jacket and includes extensive liners from Robert Townson and a note from Joe Dante.