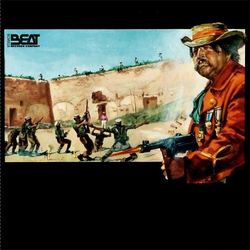 After the expanded version of the score for the TV series Il Killer, we return to Gianni Ferrio for this score from 1966. Composed during the golden era of Italo-Westerns for a movie that actually has little to do with that genre—even if at the time speaking it was disguised in such a way as to dazzle would-be audiences—Gringo, getta il fucile! (The Tough One) starred the baddest of bad guys: Fernando Sancho. It's an adventure movie set in South America for a story that follows three people hunting for a treasure.

This score, composed for a very rare film and released here for the first time ever, has the signature of Maestro Ferrio, who felt particularly free to feed his creative skills thanks to the nature of the movie. It's a fantastic score that goes from spy sonorities to danceable themes to South American sounds more apt for the setting.

More than 40 minutes of great stereophonic score, particularly multifaceted and long deserving of a full release! The CD is packaged in a jewel case, with mastering by Claudio Fuiano, liner notes by Federico Biella and a 12-page booklet designed by Daniele De Gemini. Limited edition!