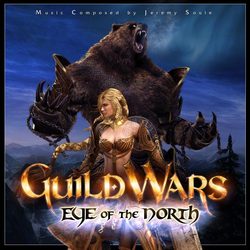 Guild Wars: Eye of the North

It comes as little surprise to find that Guild Wars: Eye of the North, the first true expansion pack for the popular CORPG (that\'s "competitive online role-playing game" - according to ArenaNet, the game\'s Seattle-based developers), is destined to find its way onto the battered hard disks of many warriors when it\'s released at the end of this month. A continuation of the Guild Wars franchise, one that has consistently received critical praise from the gaming press, Eye of the North is a welcome addition to a universe where real estate isn\'t traded for genuine gold coins and many more accolades are likely due: once seasoned hacks have made their way through 24 missions that involve more opulence than a free bar. Its likely success, then, an inevitable sticking point that may well owe much to the contribution of series-regular, composer Jeremy Soule.

Having contributed music to the Guild Wars saga, since first it raised the dogs of war in 2005, Soule has crafted an eloquent sound-world that is observational of both the demands of the scoring process and, too, of the need to show formal development. Thankfully, his writing for the Guild Wars franchise has not been so far removed from the genre demands of faux-medieval scoring as to alienate gamers, but it has shown a range that neatly ties in the bridge between the compositional traits of the late classical and early Romantic with stylistic elements of the exploratory Twentieth Century (brass as percussion, anyone?). One would think such excess might yield a lack of contrapuntal progression or that issues of orchestration might bog the overall work down, but that has certainly not been the case with Soule\'s earlier work on ArenaNet\'s offspring and nor is it with Eye of the North.

At 70-minutes long, EOTN is a generous listen and with thirty-three tracks one might be expecting the album to deflate before its barely gets off of the ground. Yet, it doesn\'t. Once the soundtrack gets into its stride with a Germanic overture it doesn\'t seem to drop a gear, favoring engaging melodic lines and the occasional disagreement with assonance – often a mêlée between dark trombone movement and anvil smashes. So, with that in mind, what do you actually get for your hard-earned groat?

How about three cracking, bravura motifs for French horn and a nod, whether intentional or otherwise, to a dead Slavic composer in airy writing for unison upper strings? The first of these melodic lines appears fully-developed in "Under the Dark Span" which, like its thematic counterparts on the album (The Norn theme, for example, which hints at a transformation of that earlier composition and shares a fundamental key) feels exciting. A sign, then, of a composer who takes a deft approach to ensure that players remain immersed in a magical world. Of course, the appearance of the other motifs later in the album - in "Tome of the Rubicon" and "Song of the Shiverpeaks", for example - is never less than fulfilling and ensures that this release maintains its direction (and, it would be a poor show had Soule\'s writing not lived up to the promise of his orchestrational decisions).

EOTN offers much room for the player and listener to sit back and count their dungeons. The grandeur of "Memories of Ascalon" is as restrained as the delicate nature of "Gwen\'s theme" and the jovial, yet eerily maudlin, "Lyssa\'s Dance". So, there\'s diversity here (the Hungarian-esque "Scrying Pool" is a standout), but not everything that lies beyond the Northern Wall is as controlled.  Witness the heavy brass syncopations in "The Shattering of the World", which also features some exceptionally well thought-through choral parts, and the relentlessness of "A Storm is Coming" - one of the few cues on the album to feature untuned percussion.

Of course, nothing\'s perfect, and it would be remiss of me not to address the album\'s few failings. I\'ve mentioned that the soundtrack is a generous listen and that it is, but I am sure that over an hour of music comprised entirely of sampled instruments might not appeal to some. It may be an issue of budget and expediency to the developers, but one that sits less well with listeners who, perhaps, it\'s assumed are too embroiled in the gameplay to notice. And then, of course, there\'s the way that Jeremy Soule has crafted masculine primary themes that are dominated by French horn. They may suit the lands of Guild Wars with their boisterous identity, but some more distinction could have rounded things off a little more - those looking for more elegaic writing, then, are advised to look elsewhere.

There\'s a great amount of emotional impact to be found in EOTN, a satisfying listen and the best effort yet to come from Soule. At least, until THQ\'s Supreme Commander II docks in space.