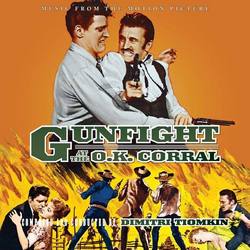 Gunfight at the O.K. Corral

Also featured are the flim's opening, closing and act break versions of "Gunfight at the O.K. Corral," performed by the one-and-only Frankie Laine. Produced by Neil S. Bulk, executive produced by Lukas Kendall and mastered by Doug Schwartz, this long-overdue release of one of Tiomkin's finest works contains exclusive, in-depth liner notes from film music writer Frank K. DeWald and pistol-slingin' art design by Joe Sikoryak. This is a Limited Edition of 2000 Units.