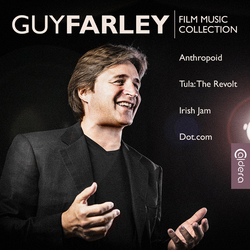 Caldera Records is proud the "Guy Farley Film Music Collection", representing a selection of four soundtracks composed by Guy Farley. Included are "Anthropoid" (2016), "Tula: The Revolt" (2013), "Irish Jam" (2006) and "Dot.com" (2007). No compilation can highlight the versatility of the British composer as well as this one: For "Anthropoid", Farley wrote a moving choral piece, while "Tula: The Revolt" shows his sure symphonic hand for romantic melodies and aggressive action. "Irish Jam" is a colourful score featuring influences from Irish folklore and "Dot.com" is a lively composition for small orchestra and solo instruments such as guitar and harmonica, portraying the joie de vivre of village life in southern Europe. All four scores are bound together by their catchy melodies and transparent orchestration, making Farley one of the most inspired British musicians who can always be trusted to deliver high-quality work. Caldera has already released three CDs with the Farley's works, "Secret Sharer", "Maria di Nazaret" and "Modigliani". This new CD is not only a celebration of our relationship, but also a celebration of great music. As a bonus, we included an exclusive audio commentary by the composer where he talks about his work. The 17th CD-release of Caldera Records features a detailed booklet-text by Gergely Hubai and elegant artwork by Luis Miguel Rojas with new, exclusive photographs taken by Madeleine Farley. The CD was produced by Stephan Eicke and John Elborg.