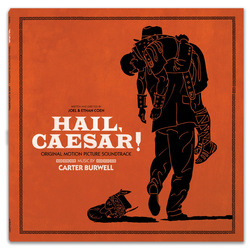 Mondo is beyond honored to present their very first Coen Brother's soundtrack, as well as our first Carter Burwell score, the magnificent soundtrack for the Coens' latest farce Hail, Caesar! which marks Burwell's 16th collaboration with the brothers.

A good part of the magic of this movie comes from the music of Carter Burwell, who dove deep into the period of the film, and the multiple film genres that it explores in each of its many tangents (including a musical number performed by Channing Tatum.) Also, drawing heavy on the red-scare, bringing selections performed by the Red Army Choir to add bombast to the scenes with would be antagonists of this story.

Artwork by BLT Communications. Layout and design by Alan Hynes.