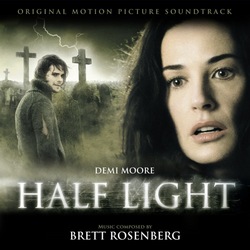 Australian composer Brett Rosenberg's score for the supernatural thriller Half Light, starring Demi Moore, is a dark and romantic orchestral work filled with beautiful themes that are contrasted by eerie suspense writing, colourfully orchestrated by Nicholas Dodd and performed by first rate London session players recorded in the magnificent Air Lyndhurst Studios. The film has been described as an "Hitchcockian thriller with a supernatural twist", and Rosenberg's score has its Herrmann-esque moments and a lot of moody atmospheres that recalls some of Christopher Young's finest genre works.

Rosenberg's music made a strong impression on its audience: an online petition resulted in hundreds of people expressing their interest in a soundtrack release of the music. In answer to this petition, and proudly introducing yet another exciting new name to the film music community, MovieScore Media has released the Half Light score online. Already before the official release of the score, Half Light has been singled out by film music journalist Jonathan Broxton as one of the best scores to come out so far this year.