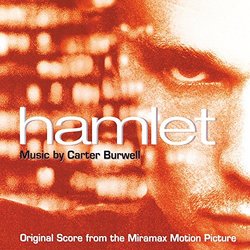 Carter Burwell, in his latest score since What Planet Are You From? tackles a modern retelling of Shakespeare's tragedy, Hamlet. Instead of kingdoms, they are corporations in modern New York. But the storyline and dialogue remain the same. As far as Burwell's score goes, the dark brooding present in most of his films is here, and it most certainly doesn't disappoint.

Beginning with "Too Too Solid Flesh", we are once again acclimatized to Burwell's great use of arpeggios, with a simple but ever-increasing theme adding more and more to the tension - but never quite climaxing. A celeste in "Murder Most Foul" reminds me briefly of his score to Fargo - but it is The Hudsucker Proxy that pops into my head most often during this score (probably because I had recently watched the film again).

What strikes me is the realization that Burwell employs only strings and woodwinds - there is no brass of any kind in this score. That type of orchestration adds a softer, richer tone to the music, and it fits well, considering the cold steel corporate metaphor occuring in the film.

"Darkroom" takes advantage of a solemn guitar solo, just before the arpeggios take over once more. The big soliloquy in "To Be or Not To Be" is underscored by a rather simple building sequence by the small orchestra. But what I love about Burwell's style, and Hamlet is no exception, is the ability he has to write music that seems to take a rather simple path - but in actuality it's more complex than a Mandlebrot sequence. Just when you would expect the music to reach a climax, Burwell tosses you a red herring and it just keeps building - and then he sucker punches you with the climax just when you didn't think it could happen.

In probably the darkest cue on the album, "Claudius Incites Laertes", a solo cello reprises the bass arpeggio from the score, repeating it over and over, until about two-minutes later, the other strings and instruments slowly come in. It's dark, it's moving, and it's perfect. Still building, the cue finally climaxes around the four-minute mark, and it's close to emotionally draining.

"The Duel" is a more driving piece with (again) an underlying bass line that the other instruments build off of. The final cue, "The End" reprises the main theme from the film, and Burwell does a great job in pulling together the best moments from some of the other themes as well - if you want to hear the bulk of the score summed up, it can be all heard in this cue.

One of the better "dark" scores he's done, Hamlet shows that Burwell is still at the top of his game, and if he can continue to produce music such as that heard in this film, I'm positive that one day he will finally be recognized for all of his great work in the film music industry. With a running time of almost 40 minutes, Hamlet might not be for everyone - but it is worth picking up if you are a Burwell fan, and are used to his style of music.