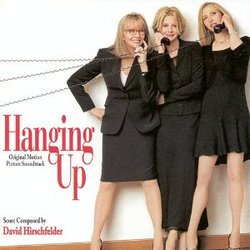 In the comedy Hanging Up, composer David Hirschfelder brings us a rather quirky whimsical score that has a flexible enough theme to work in nearly any situation. Toss in a few classic songs, and you have a rather well rounded album that makes for an enjoyable listening experience.

Beginning with "It's Too Late", we get the main theme from the film - a whimsical tune that fluctuates between major and minor chords. There is plenty of energy in this cue, and with the exception of a few momentary lapses (allowing for dialogue) it's non-stop "pep". The flashback cues provide plenty of melancholic drama, complete with the sad piano bits. In an interesting mixing decision, production audio can be heard faintly in the background of these moving cues.

"Conference Call" showcases the flexibility of the main theme to be adapted into a rather enjoyable piano solo with all of the mixed simplicities and complexities of a Bach Invention. There are a few cues that are rather contemporary in nature, such as "Memory Lane" and "Disconnect / Georgia's Arrival". Both have a jazzy feel combined with some atmospheric percussion that has a cleanly layered feel to the piece. In the latest in the slightly annoying trend of spoiler track names, "Lou Dies" is a rather soft piece which recaps many of the themes in the score, but with plenty of calm, dignified respect as such a situation would demand.

There are also a few songs on this album, such as Dean Martin's rendition of "Let It Snow! Let It Snow! Let It Snow!". Granted, I can't help but think of Die Hard when I hear it, but it's a nice inclusion on the album. Another one is "Have Yourself A Merry Little Christmas" as performed by Judy Garland. I hadn't heard this version before and found it to be quite enjoyable to listen to. Steve Tyrell's version of "Georgia On My Mind" is done rather well, but I wanted to hear Ray Charles perform it.

The album runs about 45 minutes in length, and was rather enjoyable to listen to. Hirschfelder came up with a few memorable themes that he used in different ways, and it made the whole thing more enjoyable to listen to than if he had just written incidental underscore for the film. Feel free to pick this one up if you see it in the stores, but don't feel that it's a necessary addition to any soundtrack library.