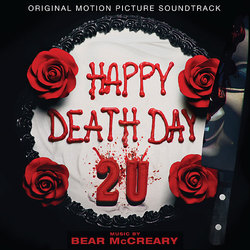 In 2017, Universal Pictures released the Blumhouse film Happy Death Day about college student Tree (Jessica Rothe) who relives the same day over and over, getting murdered each time until she's able to solve the mystery of who keeps killing her and breaks the cycle. The slasher black comedy was produced by Jason Blum and directed by Christopher Landon, and was so successful that it resulted in a sequel, Happy Death Day 2U. In the sequel, Tree finds herself once again reliving the same day, but a sci-fi element is introduced, as it turns out a science experiment is responsible not only for her daily repetition, but also thrusting her into an alternate universe. Now she must identify the killer and decide if she will stay in this alternate universe or return home.

Returning for this sequel is Bear McCreary, one of the most dramatically prolific and talented composers working today. In 2019 alone he has composed the scores for The Professor and the Madman, Rim of the World, Godzilla: King of the Monsters, and the upcoming Child's Play. Building on his score for the first film, Happy Death Day 2U expands beyond the slasher focus of the first film and emphasizes the sci-fi aspect, with large, dramatic orchestral scoring, like a cousin to his music for films like The Cloverfield Paradox. With many lengthy cues, the album is a dramatic and entertaining listening experience and is Intrada's first McCreary album.

This Intrada release on CD is courtesy of Back lot Music, who released the soundtrack digitally.