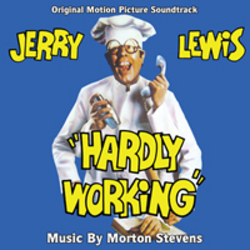 Hardly Working tells the story of Bo Hooper, a circus clown who loses his job when the circus closes down and has the worst luck ever trying to hold down a job. Seen as a comeback film after an absence of nearly a decade, Hardly Working gave Lewis the opportunity to debut his style of slapstick and sentimental comedy for a new generation of moviegoers.

Morton Stevens was hired by Jerry Lewis to score the film and while he provided slightly comic or light-hearted music to accompany some of the film's comedic set pieces, he avoided writing specific comedy music and chose to focus the score's arc on the dramatic elements of the story. Steven's central theme for Bo, apart from its introduction early in the film, is thoroughly heartfelt and captures the essence of the character. Lewis was so pleased with the score that he even took to the podium during one of the sessions at 20th Century Fox and conducted the orchestra during a couple of cues.

Born In Newark, New Jersey in 1929, Morton Stevens studied composition at the Juilliard School and became the arranger and later, the musical director, for Sammy Davis, Jr., Frank Sinatra, Dean Martin and Liza Minnelli. He also served as music director for CBS and was a prolific composer and arranger for television for over 30 years. Best known for the famous theme music for HAWAII FIVE-0, for which he won two Emmys, Stevens contributed music to many television shows, including Gunsmoke, Police Woman, Thriller, Wagon Train, The Man From U.N.C.L.E., Cimarron Strip, The Wild Wild West, Tiny Toon Adventures. Stevens also served on the board of directors for the Academy Of Television Arts And Sciences. Surprisingly, he only scored a few feature films including Act of Piracy, They Still Call Me Bruce, Cracking Up and The Raiders. A great deal of the composer's output has not been released on record or compact disc.

This album is a limited edition release of 1000 units.