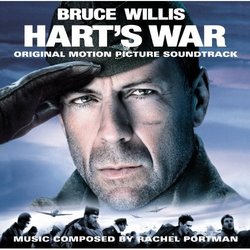 Anyone who loves movies likely knows that if there is one resoundingly sad Hollywood truism, it's the fact that women will almost always go see a movie predominantly about men, but your average male viewer would rather gnaw his own leg off than sit through Boys On The Side or Little Women. Ah, but without such hypocrisy, we may never have been blessed with one of the most prolific male-bonding genres - the prisoner of war film. Which leads me to the picture in question, director Gregory Hoblit's Hart's War, an uncynical hybrid of wartime classics like Stalag 17 and courtroom dramas such as A Few Good Men. If nothing else, you've got to respect Hoblit's decision in hiring the Oscar-winning Rachel Portman to eke a little sensitivity out of all the ass-slapping and fart jokes. (I'm just kidding - Hart's War seems a perfectly respectable picture.)

"Final Salute" begins the album (and with that kind of track title, ends the film) with a melancholic long-form theme, first for solo trumpet and then for soaring strings. Both majestic and somber, it paints the canvas of the score quite wide and serves as a primer for the rest of the proceedings.

"Hart Captured And Interrogated" moves things along with great anticipation, featuring an intensely thrumming string and piano as well as some subdued string writing texturally reminiscent of that old James Horner war standard, Glory. And maybe I'm just too used to hearing Hans Zimmer's pounding synths in these movies, but Portman shows considerable restraint and class with the urgent, rising scherzo of "Train Yard Strafing And Bombing". Her instincts are admirable, playing to the human drama of the moment and not the exploding shells.

Another relentless string ostinato carries the bulk of the seven minute "Visser Finds Tunnel", but the cue never quite takes off the way one might hope. "March To Stalag 6A" and "Everything Is Ok, Tommy" serve as a additional reprisals and hints of the principal thematic material, but the album carries on in much the same subdued fashion it was begun with, not really wavering or taking too many chances. For as much as one must admire the skill of Portman's writing, even the relatively scant forty five minutes represented on Decca's disc begins to drag midway through.

It's not until the frantic "Hart Discovers Tunnel" that the score's blood really gets pumping again. And by that point, we're on to the requisitely uplifting self-sacrifice of "McNamara Trades His Life" - proving once again that if Bruce Willis is going to suck it up and be an ensemble player (as he did in Armageddon), he's probably going to end up martyring himself just to get a little attention. Beyond that, Portman's "End Credits" are another album highlight, a briskly paced exercise for strings that surprisingly (and refreshingly) focuses on her secondary themes for the score.

Overall, Hart's War is just fine for what it is - a handsomely crafted and well-recorded score that no doubt serves its film wonderfully, but comes off a bit long in the tooth all by itself. And one more thing: what the hell's with those track titles? "Archer Shot Dead" and so on. I thought Phantom Menace had some awful spoilers, but this CD reads like a studio executive's story notes.