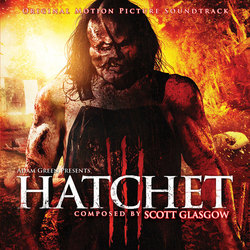 For the 2013 film Hatchet III, composer Scott Glasgow chose not to incorporate any musical ideas from the first two films, but rather focused on Krzysztof Penderecki's use of aggressive textures to create contrast amongst the musical layers. He brought in Cajun instruments such as a washboard, ratchets, hat boxes and Cajun spoons to complement the orchestra percussion section. The straight-playing of the spoons in particular gives the sense of a ticking clock. While there is no particular theme per se, Glasgow discovered that there is indeed a recurring "theme" in the low strings. It is made up of low phrase "breaths," or small segments with pauses. Once the action starts, the score is fiercely relentless, with orchestral violence and those intense aggressive textures. Each crazy orchestral element was carefully chosen and layered to create a balance of high, middle and low musical elements that could be wiggly, jagged, sustained or just a block of sound completely married to the action in the film.