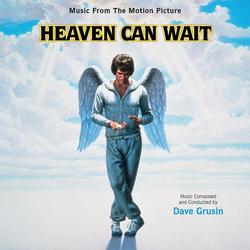 Heaven Can Wait / Racing with the Moon

Track Listing Legend:
* Arranged and Conducted by Billy May

We are proud to announce the newest release in our WE HEAR YOU series, a Dave Grusin "two-fer" featuring his magnificent scores for Heaven Can Wait and Racing With The Moon. Heaven Can Wait was originally released in 1985 and Dave Grusin would go on to receive his first ever Oscar nomination for Best Original Score. The score mixed the romantic along with the melancholy to fit perfectly with the story of a professional quarterback, played by Warren Beatty, who dies prematurely and is sent back to Earth to temporarily inhabit the aging body of a murdered millionaire. While inhabiting his new body, he meets the love of his life played by Julie Christie. Paired with Heaven Can Wait is Richard Benjamin's 1984 coming of age, romantic drama, Racing With The Moon. The movie's three young leads would go on to great future success: Sean Penn, Nicholas Cage and Elizabeth McGovern. The film is set in 1940s California where two young men await induction into the Marines to fight in World War II. The score is melodic and thematic and is reflective of the period the main characters live in. Many fans have asked us to reissue this "two-fer" since the original Kritzerland release sold out in a matter of days.