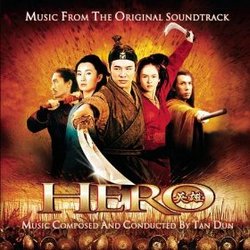 Hot on the heels of Crouching Tiger, Hidden Dragon comes Hero, a Chinese film about a man (Jet Li) who stops two of China's most ruthless assassins from killing the Emperor. As a reward, he is granted an audience with his majesty, where he tells his tale of how he caught the assassins. What ultimately unfolds is a story told through different viewpoints, with a few twists and turns along the way. In the middle of it all is a story about love, heroism, friendship, and sacrifice. Originally released overseas in 2002, the film was nominated for a Best Foreign Film Oscar, but after many delays has finally arrived on our shores. Supporting the emotional journey of the film with his score is Oscar-winning Crouching Tiger, Hidden Dragon composer Tan Dun.

The main Hero theme is heard in the first track, "Hero: Overture", performed by famed violinist Itzhak Perlman (who provides the violin solos on the score). He is then joined by a male choir humming the theme - it is strong, powerful, and regal. There are three primary types of orchestration in the film: somber solos for the romantic angle, taiko drums and percussion for the fights, and orchestra with large male choir for the military and army sequences. The emotion ranges from strong and militaristic ("Warriors"), to sad and melancholy ("Above Water"). The large range emotion allows the listener to become engrossed within the album, and the sequencing allows for an excellent recreation of the musical storyline of the film.

A visually striking film, one of the best sequences was the fight in the leaves, and the imagery combined with Tan Dun's sad female solo in "Gone With Leaves" made it one of the most memorable sequences I've seen. A source cue, of sorts, "In The Chess Court" features a guqin (ancient lute) and the KODO Drummers of Japan on taiko drums. It's difficult to describe the visceral emotions one feels when hearing those pounding drums, but combined with the fabulous imagery on screen, it's truly breathtaking.

While some people might suggest that Tan Dun is simply revisiting what he did for Crouching Tiger, Hidden Dragon with Hero, I would strong disagree. The inclusion of choir and stronger thematic material, combined with the nuances and variants on the themes within the score add to the emotional power of the film greater than I would have expected. Missing from the album is the obligatory pop song heard during the film's credits - it was on the import version of the album. This is not necessarily a bad thing, however! Tan Dun hasn't done many film scores - but with each subsequent one, his work improves, and I simply cannot wait to hear what he comes up with next.