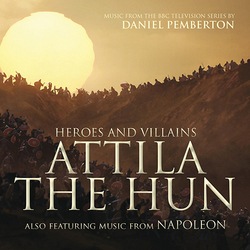 Pemberton, a remarkable talent who has written a lot of strikingly original music for UK television, wrote the music for the two first episodes of the series, focusing on Attila the Hun and Napoleon.

This album features both scores, beautifully performed by the City of Prague Philharmonic Orchestra. Attila is a symphonic adrenaline fest with its epic action music and ethnic colorings, while Napoleon impresses with its Beethoven-influenced classical sound. BBC originally aired this series in 2007—here is your chance to relive the excitement of the show!